A Tail of Two Sedums (Donkey's Tail or Burro's Tail? Which is which?) 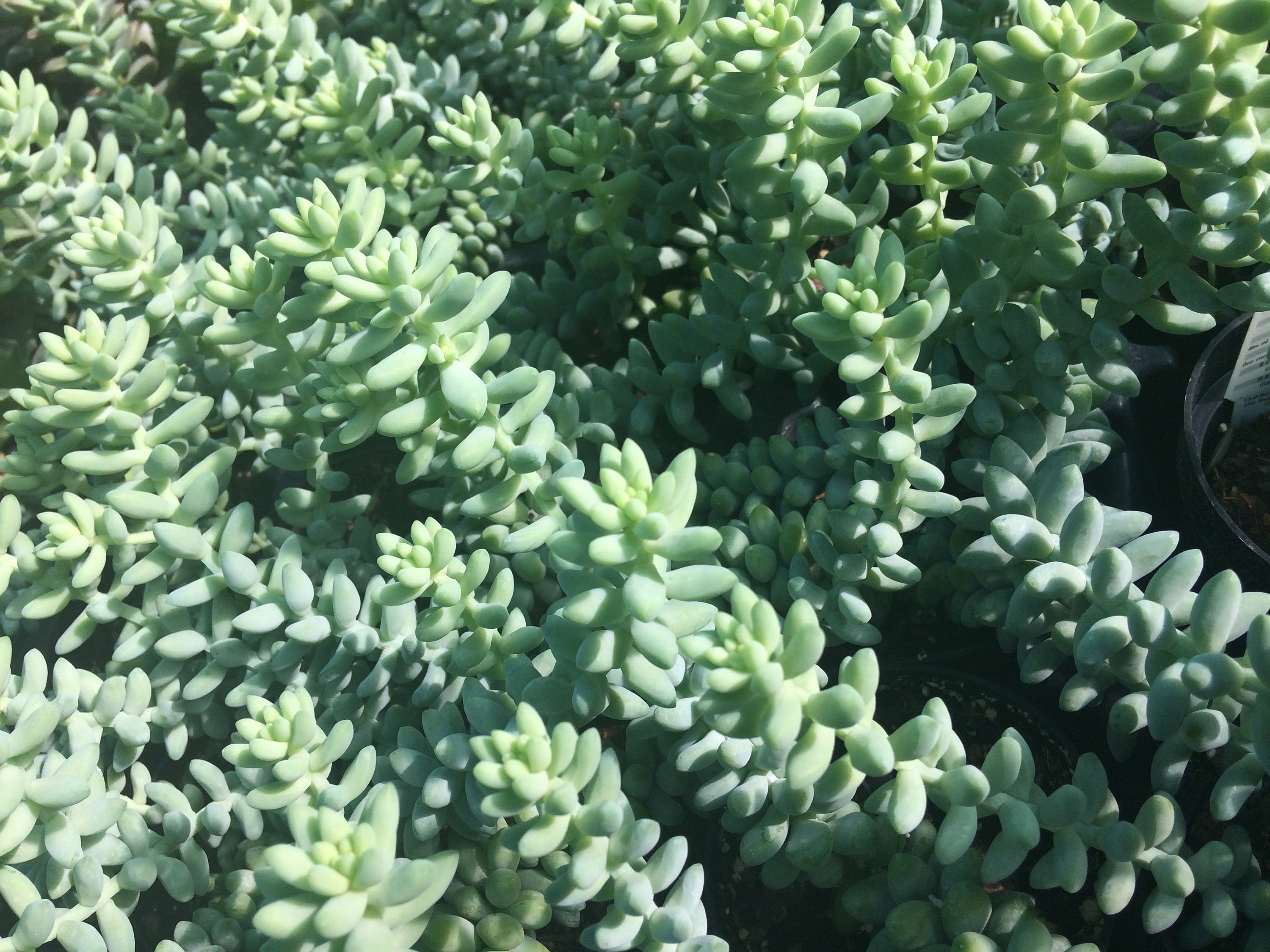 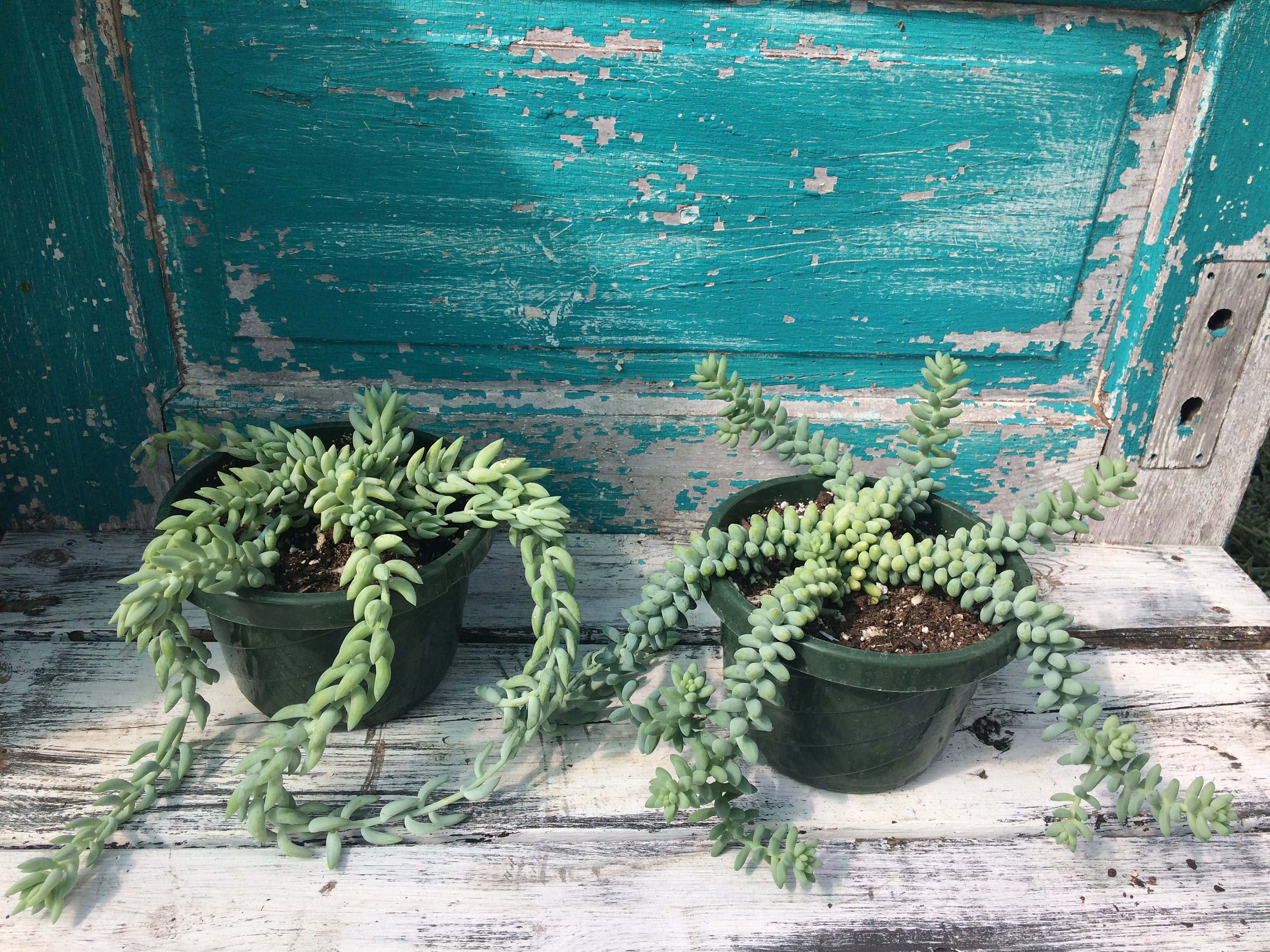 Like many of you, I'm always looking for new and interesting plants. When I first saw this one, in a photo posted online of a fully mature plant, I fell in love. I'm here to tell you why you should love it, too. :)

Sedum morganianum is a fragile and unique succulent. As it grows and trails, its thick clusters of crescent-shaped leaves spiral around its stem. It gets its name from the tail-like appearance those clusters create. This is possibly the perfect plant to use in a head-shaped planter, which is why I'm on the hunt for a medusa head to plant mine in. Mature specimens will produce reddish-pink flowers at the end of their 2'-4' long stems in the spring and summer.

It's hanging, trailing habit makes it uniquely suited to its native growing environment. Originating in the cliffs and canyons of southern Mexico, it's become a favorite of gardeners and house plant hobbyists around the world since it's discovery in the mid 1930's. It's fragile leaves break off easily, but they also root quickly and produce new plants with ease. (As I write this, it makes me wonder if perhaps that very fragility-and quick and easy propagation by fallen leaves-is the plant's way of ensuring clonal survival of it's species. It seems logical, anyway. Since they flower, they're able to set seed and reproduce that way, but having another way to reproduce would be a definite plus in a harsh environment. What are your thoughts?)

Since they lose leaves easily, they're tough to keep looking 100%, especially if you keep it on a shelf instead of hanging it. However, they tend to branch where they lose leaves, and fill in over time. Mine was looking great, with several long, trailing stems full of juicy leaves, until I decided to move it around to find "the perfect spot". One stem is now missing about half of it's middle leaves, and another got chopped and stuck back into the pot, along with countless leaves for babies. Sigh. Someday I'll learn not to move stuff that's happy where it is!

As popular as donkey's tail is, not many people know that there are actually two kinds (and a few imposters, but we won't get into those). Donkey's Tail (sedum morganianum) and Burro's Tail (sedum morganianum 'Burrito' or simply sedum 'Burrito', depending on the source) are so similar that they're often sold under the same name. Even botanists can't seem to agree on whether 'Burrito' is a variation or mutation of s. morganianium, or it's own species. (For the purposes of this article, I'm drawing a line in the sand - S. morganianum is Donkey's Tail, while S. 'Burrito' is identified as Burro's Tail. The names are interchangeable for general use.)

So how can you tell them apart?

It's actually quite easy. S. morganianum has the aforementioned crescent-shaped leaves, which are generally somewhat loosely clustered along the stem. S. 'Burrito' has leaves that are more rounded and bead shaped, and they're usually more tightly clustered on the stem. You can clearly see the differences in the photo below of our rooted plugs, with Donkey's Tail on the top, and Burro's tail on the bottom. Like Donkey's Tail, Burro's Tail originates in Southern Mexico, but wasn't discovered by botanists until the mid-1970s. 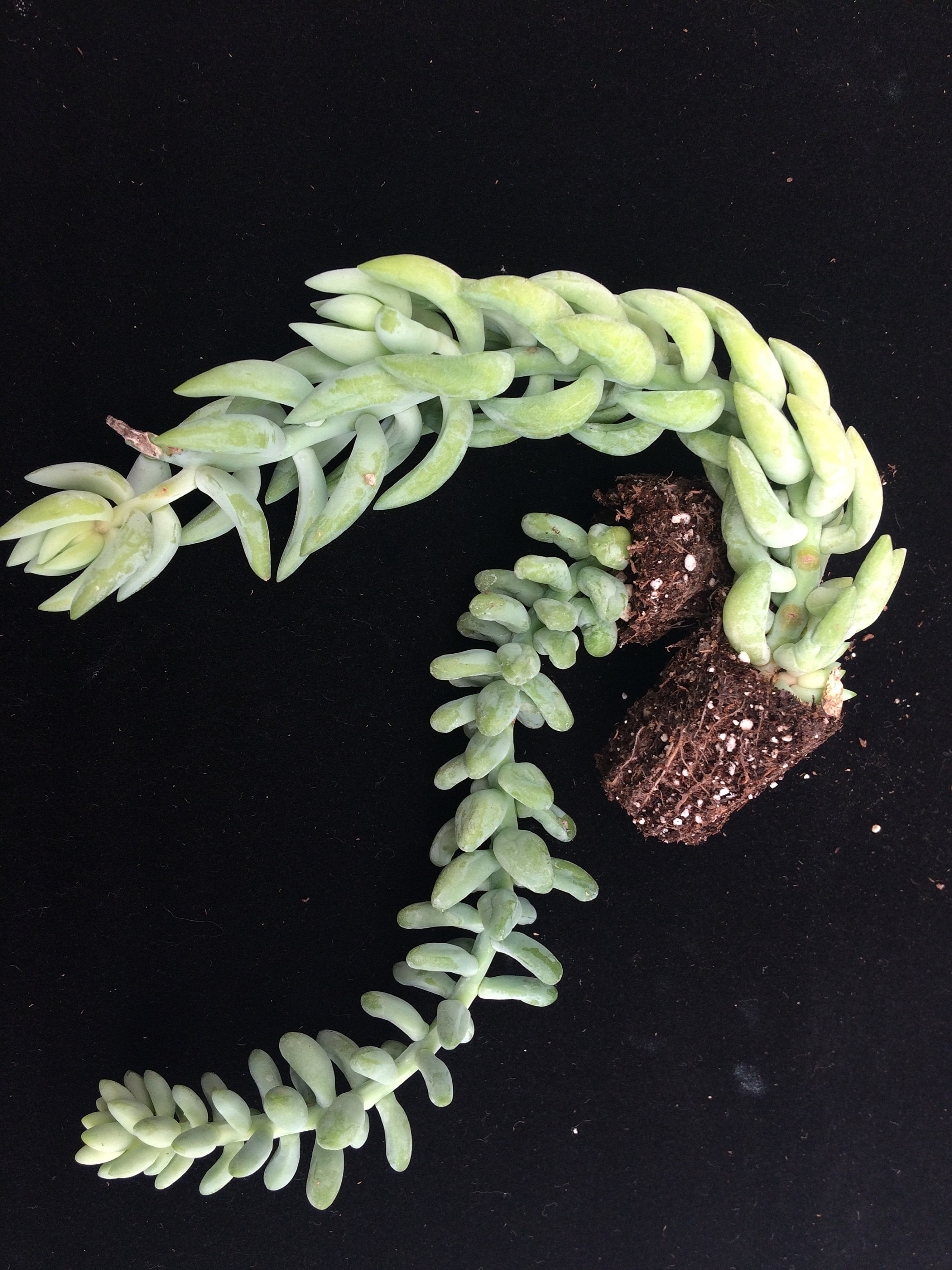 Other than the shape of the leaves, the two plants are virtually indistinguishable from one another. Both prefer high amounts of sunlight and minimal watering. Both are best suited for hanging baskets, or containers that allow them to trail without being moved too much.

For those of us in the midwest, these plants are best grown in a south or west window indoors. You want it close to the window, without being in super hot sunlight that will burn it. If, like me, you choose to take your sedum outside for the summer, be sure to place it in a location with strong morning and midday sun, with filtered light during the heat of the early afternoon. Too intense exposure to sunlight will cause the leaves to discolor and burn, but they want high amounts of light to keep their leaves clustered tightly. If there's too much space between the leaves, and your plant looks leggy and sad, slowly introduce it to higher amounts of light (or place it under a grow light if you're keeping it indoors).

How much water they need is a tricky subject that depends on many variables, like pot size, pot material, soil quality, plant location (inside or outside), your humidity levels, and other factors. For the most part, you'll want to water about every 2 weeks or so. Let the soil dry between watering, and water sparingly in winter. You're better off underwatering these plants, since they tend to lose leaves more easily when they're well hydrated. They'll tell you if they're thirsty when their leaves get soft and wrinkly.

All in all, Donkey's Tail and Burro's Tail are fun and beautiful plants that add a conversation piece to any home or garden. As a bonus for those of you with pets or young children, they're not toxic to humans or animals. I wouldn't call them kid-friendly plants, since they're fragile, but in a hanging basket they can be safely admired by all ages.

I'm anxiously awaiting the day mine reaches it's mature size of 2'-4' long - if I can manage to keep it's leaves attached!

Do you have a s. morganianum you'd love to show off? Visit us on Facebook, or tag us on Instagram, so we can admire your awesome plants! 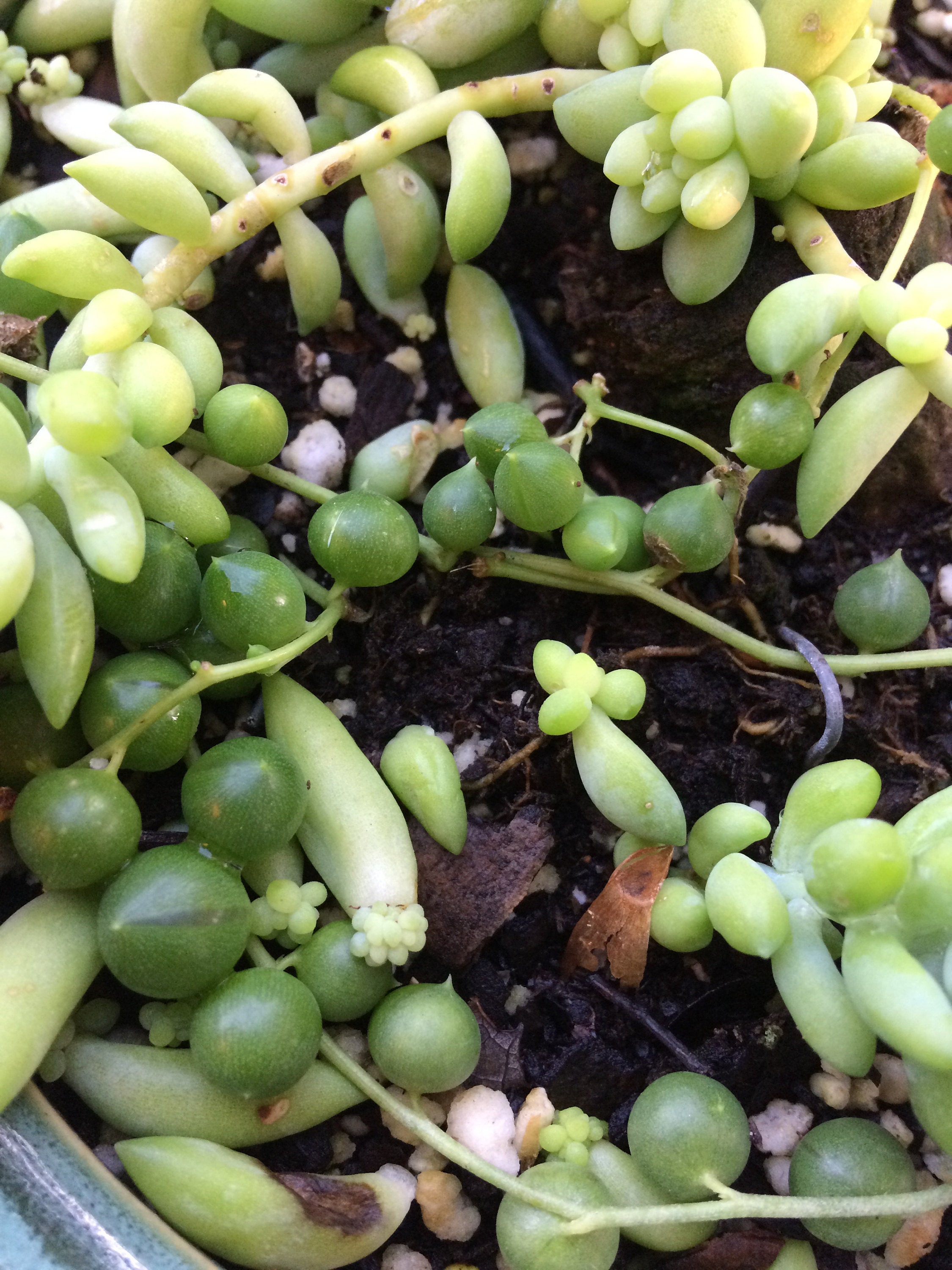